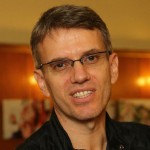 Veni Markovski has graduated law, but before that, back in September 1990
he started his work on the Internet, as a system operator of the first
Sofia-based bulletin-board system, part of FidoNet.

In 1993 Mr. Markovski co-founded bol.bg, the second Internet service
provider in the history of Bulgaria. Veni Markovski was President and CEO
of bol.bg until 2002, and later the company was successfully sold in 2008
to an international investment fund.

In 1995 he co-founded the Bulgarian Internet Society, a non-profit, of
which he serves still as President and chairman of the Board. In March 2002
Mr. Markovski was appointed as the Chairman of the Bulgarian President’s IT
Advisory Council, a position he held until the President stepped down from
office at the end of his second term on January 22, 2012.

Between 2006 and 2009 Mr. Markovski was senior advisor to the chairman of
the governmental Agency for Information Technologies and communications.

Since March 2014 Mr. Markovski is the ICANN vice-president, responsible for
the relations with the United Nations, the UN Agencies, and the Permanent
Missions to the UN in New York.